THIS PAGE WILL BE UPDATED WITH THE LATEST NEWS

Iranian teachers hold protest rallies on May Day despite crackdowns 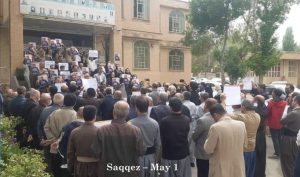 Teachers in dozens of cities across Iran held May Day protest rallies to raise their longstanding demands for better pay and working conditions, education reform and the release of arrested teachers. With an economy in shambles, and with several US sanctions against them regarding their nuclear program, human rights abuses and support for global terrorism, the Iranian regime is desperately looking for a way out of its current predicament, without any success so far.

One of the most affected areas, after its oil industry, is the regime’s exports and imports. Both of these fell sharply after the sanctions were imposed, and besides oil, most of Iran’s mines and natural resources are also affected by the sanctions. Even one of the regime’s main sources of export revenue, industrial metals, was lost.

Expressing her solidarity with Iranian workers and teachers, Sharon Burrow, General Secretary of the International Trade Union Confederation (ITUC), sent a video message on the occasion of International Workers’ Day, in which she hailed the unprecedented courage of workers and Iranian teachers and supports calls on them to claim their rights.

The International Trade Union Confederation (ITUC) has offices in 163 countries and has over 200 million members.